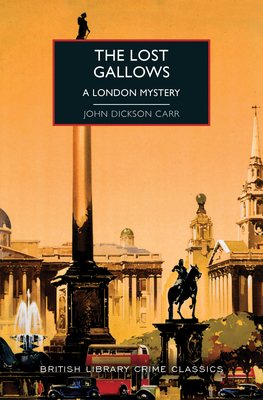 The British Library resurfaces an early gem from one of the great writers of the Golden Age of classic crime fiction.

As the thick, autumnal fog chokes the capital, within the fire-lit lounge of London's notorious Brimstone Club a bizarre tale is being spun for Inspector Bencolin and his friend Jeff Marle. A member of the club has been sent a model of a tiny gallows, and the word is that the folkloric hangman Jack Ketch has been stalking the streets for victims by night, his gibbet in tow.

The threat of this supposed bogeyman becomes thrillingly real when that same night Bencolin and Marle are almost run down by a limousine with a corpse behind the wheel. When an ominous message claims the car's passenger has been taken to the gallows at Ruination Street for hanging, the detective and his associate venture into the night to discover the truth behind the terrifying Ketch and a street which cannot be found on any map.

First published in 1931 at the outset of Carr's legendary career in crime writing, this atmospheric mystery boasts all of the twists, tension, and unforgettable scenes of a young master at work.

Also in the British Library Crime Classics:
Smallbone Deceased
The Body in the Dumb River
Blood on the Tracks
Surfeit of Suspects
Death Has Deep Roots
Checkmate to Murder

John Dickson Carr (November 30, 1906 - February 27, 1977) was a hugely popular and prolific author of crime fiction, regarded as one of the finest writers of 'Golden Age' mysteries. He was one of only two Americans ever admitted to the Detection Club, a prestigious honor amongst writers.
"Carr (1906–1977) is at the top of his game in this taut whodunit first published in 1931...The British Library Crime Classics series has unearthed another worthy golden age puzzle." — Publishers Weekly, Starred Reviews