The So Blue Marble (Paperback) 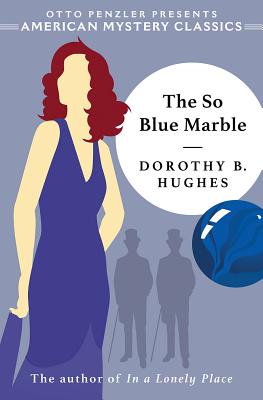 The So Blue Marble (Paperback)

By Dorothy B. Hughes, Otto Penzler (Introduction by)

The society pages announce it before she even arrives: Griselda Satterlee, daughter of the princess of Rome, has left her career as an actress behind and is traveling to Manhattan to reinvent herself as a fashion designer. They also announce the return of the dashing Montefierrow twins to New York after a twelve-year sojourn in Europe. But there is more to this story than what’s reported, which becomes clear when the three meet one evening during a walk, and their polite conversation quickly takes a menacing turn. The twins are seeking a rare and powerful gem and they believe it’s stashed in the unused apartment where Griselda is staying. Baffled by the request, she pushes them away, but they won’t take no for an answer. When they return, accompanied by Griselda’s long-estranged younger sister, the murders begin...

Drenched in the glamour and luxury of the New York elite, The So Blue Marble is a perfectly Art Deco suspense novel in which nothing is quite as it seems. While different in style from her later books, Dorothy B. Hughes’s debut highlights her greatest strengths as an author, rendered with both the poetic language and the psychology of fear for which she is known today.

Dorothy B. Hughes (1904–1993) was a mystery author and literary critic. Born in Kansas City, she studied at Columbia University and won an award from the Yale Series of Younger Poets for her first book, the poetry collection Dark Certainty (1931). After writing several unsuccessful manuscripts, she published The So Blue Marble in 1940, winning praise for its terse, hard-boiled prose.

Hughes published thirteen more novels, the best known of which are The Fallen Sparrow (1942), Ride the Pink Horse (1946), In a Lonely Place (1947). All three were made into successful films. In the early fifties, Hughes largely stopped writing fiction, preferring to focus on criticism, for which she would go on to win an Edgar Award. In 1978, the Mystery Writers of America presented Hughes with the Grand Master Award for literary achievement.

Otto Penzler, the creator of American Mystery Classics, is also the founder of the Mysterious Press (1975); Mysterious Press.com (2011), an electronic-book publishing company; and New York City’s Mysterious Bookshop (1979). He has won a Raven, the Ellery Queen Award, two Edgars (for the Encyclopedia of Mystery and Detection, 1977, and The Lineup, 2010), and lifetime achievement awards from Noircon and The Strand Magazine. He has edited more than 70 anthologies and written extensively about mystery fiction.

A movie star–turned-designer gets swept into a murderous hunt for a precious gem in this reissued 1940s thriller.

Griselda Satterlee (not, thank God, her screen name) has decided to give up the screen for the comparatively quieter life of fashion design. During a trip to New York, which will reunite her with her two sisters and find her staying in her ex-husband's digs near Madison Avenue, Griselda returns home one night only to be accosted by the Montefierrow twins, denizens of the society page, back in town after a dozen years on the Continent, and as thoroughly, chillingly, cold-bloodedly homicidal a pair as has appeared in any thriller. The twins insist that Griselda's ex is in possession of a rare and ancient gem, which they call the blue marble, and insist she knows where it is. Her own insistence that she has no idea spurs the twins to a series of vicious murders, made even more horrible by the alternately gleeful and bored participation of Griselda's conscienceless, psychopathic younger sister. Some of the murders are committed to extract information and some just to tidy up loose ends. But as with everything else in the rather intricate plot, the particulars drop away and the motive, far more than obtaining the marble, becomes the desire for mayhem and casual sadism, all of it executed as casually as ordering another round. Nearly 80 years after its initial publication, there is still nothing like Hughes' (The Expendable Man, 1963, etc.) debut novel. The 1940s New York setting, the characters who drink like fish and dress for dinner and take cabs to go a block—because, really, who walks?—give the book the sophisticated luster of romantic comedy. But it's as if a Lubitsch movie kept being periodically taken over by David Lynch. It remains funny only now we're being asked to laugh at murder and threats and oddball sociopaths. And so the book becomes genuinely nightmarish, at times close to suffocating.

The debut by one of the great American suspense writers will suck you in even as it makes you keep asking, "Did I just read that?"

Nonstop action, with menace and daring exploits bursting through the smooth veneer of upper-class life....Readers new to this forgotten classic are in for a treat.
— Publishers Weekly

You will have to read [The So Blue Marble] for yourself, and if you wake up in the night screaming with terror, don’t say we didn’t warn you.
— The New York Times Book Review