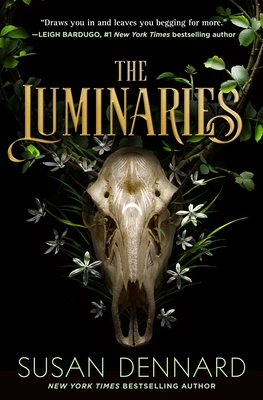 This is book number 1 in the Luminaries series.

“This book felt like Divergent, Vampire Academy, and The Grey collided to form a new class of monsters and hunters. I loved the protagonist’s search to make a place for herself. I couldn’t stop until the last word, and then I wished for more!”
— Stephanie Staton, CoffeeTree Books, Morehead, KY

From Susan Dennard, the New York Times bestselling author of the Witchlands series, comes a haunting and high-octane contemporary fantasy about the magic it takes to face your fears in a nightmare-filled forest and the mettle required to face the secrets hiding in the dark corners of your own family.

Hemlock Falls isn't like other towns. You won't find it on a map, your phone won't work here, and the forest outside town might just kill you.

Winnie Wednesday wants nothing more than to join the Luminaries, the ancient order that protects Winnie's town—and the rest of humanity—from the monsters and nightmares that rise in the forest of Hemlock Falls every night.

Ever since her father was exposed as a witch and a traitor, Winnie and her family have been shunned. But on her sixteenth birthday, she can take the deadly Luminary hunter trials and prove herself true and loyal—and restore her family's good name. Or die trying.

But in order to survive, Winnie enlists the help of the one person who can help her train: Jay Friday, resident bad boy and Winnie’s ex-best friend. While Jay might be the most promising new hunter in Hemlock Falls, he also seems to know more about the nightmares of the forest than he should. Together, he and Winnie will discover a danger lurking in the forest no one in Hemlock Falls is prepared for.

Not all monsters can be slain, and not all nightmares are confined to the dark.

"You'll want to get lost in the world of The Luminaries again and again.”—Leigh Bardugo, #1 New York Times bestselling author

Susan Dennard is the award-winning, New York Times bestselling author of the Witchlands series (now in development for TV from the Jim Henson Company), and the Something Strange and Deadly series, in addition to short fiction published online. She also runs the popular newsletter for writers, the Misfits and Daydreamers. When not writing or teaching writing, she can be found rolling the dice as a Dungeon Master or mashing buttons on one of her way too many consoles.

“Will draw you in and leave you begging for more. Rich with tension, atmosphere, and finesse, you'll want to get lost in the world of The Luminaries again and again.”—Leigh Bardugo, #1 New York Times bestselling author of Shadow & Bone and The Ninth House

“I lost myself from page one in Hemlock Falls and its deadly forest, as vicious as it is inescapably alluring. Winnie Wednesday is the sort of outcast-turned-monster-hunter you can't help loving and rooting for.”—Marissa Meyer, #1 New York Times bestselling author of Gilded

“Readers will want to don a motorcycle jacket and join the nightmare hunt.”—Kirkus Review

“Enthralling from the first page, The Luminaries lures you into a misty darkness rife with thrills and romance. Living nightmares may stalk across the pages, but this book is a paranormal fantasy dream. The forest calls, and you will love every second of devouring its mysteries.”—Alexandra Bracken, #1 New York Times bestselling author of Lore

“The Luminaries is exactly the thrilling, dangerous, heart-pounding fantasy I needed, with an incredibly original world and a heroine who knows and fights for her worth. Prepare yourself accordingly—I devoured this in a single sitting.”—Marie Lu, #1 New York Times bestselling author of Skyhunter

"Dennard’s newest is overflowing with action, adventure, and mystery with a sprinkling of romance that will keep readers turning the page."—Booklist

“The Luminaries is your next obsession. Part family drama, part fantasy procedural, part helpful guide to monster hunting, all with a dash of romantic tension—this book is all my favorite things combined.”—Olivie Blake, New York Times bestselling author of The Atlas Six

“A richly realized tale about monster hunters that explores family, community, and a whole lot of female rage.”—Paste

“In The Luminaries, bestselling author Susan Dennard kicks off a darkly magical, action-packed new series and introduces a mysterious world filled with monsters. . . . Plenty of gasp-inducing thrills, monstrous gore and empathetic soul-searching—plus a little tentative flirting—bring The Luminaries to a satisfying conclusion.”—BookPage

“The Luminaries is a chilling, gripping contemporary fantasy. . . . readers can only hope that the nightmares induced by The Luminaries will be vanquished by someone as brave and real as Winnie Wednesday.”—Shelf Awareness, STARRED review