Don't Ever Look Back: A Mystery (Buck Schatz Series #2) (Paperback) 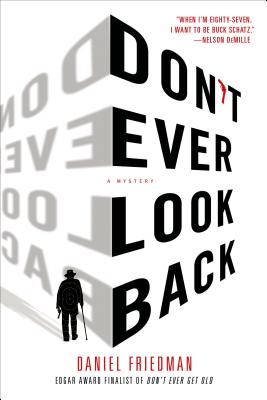 Don't Ever Look Back: A Mystery (Buck Schatz Series #2) (Paperback)

This is book number 2 in the Buck Schatz Series series.

DON'T EVER GET OLD was one of mystery-publishing's biggest critical successes, earning starred reviews from every major trade publication, garnering nominations for the Edgar, Thriller, and Anthony awards, and winning the Macavity Award for Best First Novel. The producer of four Harry Potter films and the Sherlock Holmes sequel, Lionel Wigram, is set to produce the film version.

In Daniel Friedman's new novel, set in Memphis, Tennessee, and four months after the events of DON'T EVER GET OLD, eighty-eight-year-old Buck Schatz is reluctantly coming to terms with the fact that he can only move around with the aid of a walker, and his dementia seems to be getting worse.

So when one of Buck's long-time foes, a bank-robber named Elijah, comes to Buck looking for protection from mysterious pursuers, Buck wavers. In the end, his desire to cement his legacy by closing out a series of long-unsolved robberies overwhelms his usual antipathy toward doing favors for people he dislikes. Buck agrees to broker Elijah's surrender to the authorities, if Elijah will promise to confess to his long-ago crimes.

But nothing involving Elijah, or Buck, is ever simple, and Elijah's plans for Buck are more sinister than they first appeared.

Written in Buck's signature voice and featuring a mystery that will knock your socks off, DON'T EVER LOOK BACK takes a decades-old feud between two dangerous—and now elderly—men and brings it to a final, explosive conclusion.

“Enjoy the plot, which even has a locked-room mystery packed into it. Savor the resonant prose as a reminder of how flabby much best-seller writing has become. Delight in Buck's deadpan humor, but don't fall for it. No codger cuteness here; his nastiness can shock.” —Booklist

“Don't Ever Look Back is a funny, smart, and vibrant work of crime fiction. Good luck finding anything more from a novel this year.” —Wiley Cash, New York Times bestselling author