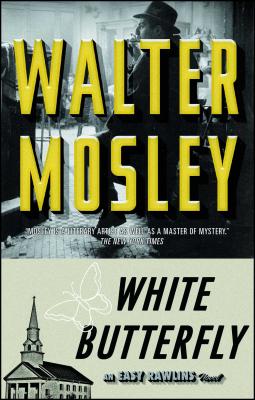 This is book number 3 in the Easy Rawlins Mystery series.

From the acclaimed bestselling author of the Easy Rawlins series, deemed “one of America’s best mystery writers” (The New York Times Book Review), comes a tale about a murdered man who does not want to go to heaven or hell—he’d rather have his old life in Harlem.

The police don't show up on Easy's doorstep until the third girl dies. It's Los Angeles, 1956 and it takes more than a murdered black girl before the cops get interested. Now they need Easy. The LAPD need help to find the serial killer who’s going around murdering young, African American strippers. They only show up when the killer murders a white girl.

But Easy turns them down. As he says: "I was worth a precinct full of detectives when the cops needed the word in the ghetto." He’s married now, a father, and his detective days are over. When the white college coed dies, the cops make it clear that if Easy doesn't help his best friend is headed for jail. So Easy is back, walking the midnight streets of Watts and the darker twisted avenues of a cunning killer's mind, in the most explosive Easy Rawlins mystery yet.
Walter Mosley is the acclaimed author of forty-three books, including the internationally bestselling Easy Rawlins series. His best known Easy Rawlins novels include Devil in a Blue Dress, A Red Death, White Butterfly, Black Betty, and Little Yellow Dog. He is also the author of the collection of stories Always Outnumbered. Always Outgunned featuring Socrates Fortlow, which was the basis for an HBO feature film. A former president of the Mystery Writers of America, he was named a grand master by the organization in 2016. He has served on the board of directors of the National Book Foundation and is a recipient of the PEN American Center Lifetime Achievement Award. A native of Los Angeles, he now lives in New York City.

"With White Butterfly, Walter Mosley has established himself as one of America's best mystery writers."
— The New York Times Book Review

"Rawlins...might be the best American character to appear in quite some time."
— Entertainment Weekly

“Startling and powerful…Mosley handles well the conflict between good and downright dirty that drives the great street detectives of the crime genre.”
— Newsday

“If [Philip] Marlowe was tough, Easy has to be even tougher.”
— Washington Post Book World

“Crackles with the suspense and wit of vintage Raymond Chandler and Dashiell Hammett, but its keen commentaries on racial issues make it a vital piece of modern fiction…Mosley has earned a place among contemporary masters of crime fiction.”
— Boston Sunday Herald