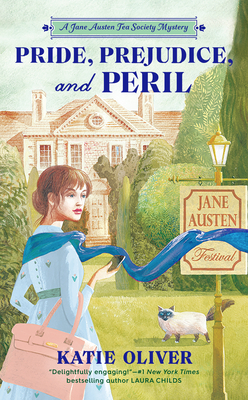 This is book number 1 in the A Jane Austen Tea Society Mystery series.

Phaedra Brighton is perfectly content with her life of lecturing college students, gossiping with her best friends, and dreaming of Mr. Darcy. As a young, respected (if somewhat peculiar) English professor, her expertise lies in all things Jane Austen—but she knows that the closest she'll ever get to being a real-life Elizabeth Bennet is in her dreams.

When Who Wants to Marry Mr. Darcy, a new reality TV show, starts filming at her best friend Charlene's estate, Phaedra is intrigued. And when the producer asks her to lend her Austenian knowledge as a consultant on the show, she's over the moon. But on the first day of filming, when Charlene's new husband is found electrocuted and Charlene herself is accused of the crime, Phaedra comes crashing back to reality.

With murder on the syllabus and her best friend in dire straits, there's no Mr. Darcy around to help Phaedra—she'll have to get to the bottom of this mystery herself.
Katie Oliver is known internationally as a writer of Jane Austen rom-coms with a hint of mystery. In the U.S. and the U.K., she's the bestselling author of the Dating Mr. Darcy and Marrying Mr. Darcy series (HQ Digital).
"A crackling good mystery: like a modern-day Agatha Christie bestowed with a hefty dollop of Jane Austen. It’s deliciously written, emotionally resonant, and delightfully engaging. Katie Oliver’s cinematic eye is spot on!"
—Laura Childs, #1 New York Times bestselling author of the Tea Shop Mystery series

"Katie Oliver has penned a delightful mystery that pays homage to Jane Austen with a head strong heroine, Phaedra Brighton, whose quick wit and deductive reasoning are tested on a terrific puzzler of a murder mystery set against a brilliant literary backdrop. This is a must read for all Jane Austen fans!"
—Jenn McKinlay, New York Times bestselling author

"With her empire waist dresses and her cell phone tucked into her reticule Professor Phaedra Brighton might seem to go overboard lecturing on the works of Jane Austen, but there’s no denying her passion for her subject. She might dream of Regency romance, but when it comes to solving murders, Phaedra proves to be a thoroughly modern woman. You don’t have to love Jane Austen to love the quirky, determined Phaedra and immerse yourself in her world in this sparkling new series."
—Vicki Delany, national bestselling author of the Catskill Summer Resort Mysteries

"Oliver links her passion for all things Jane Austen to a cozy whodunit...[she] bustles so nimbly among the assorted academics, relatives, and TV types that the killer sneaks in under the radar."
—Kirkus Reviews