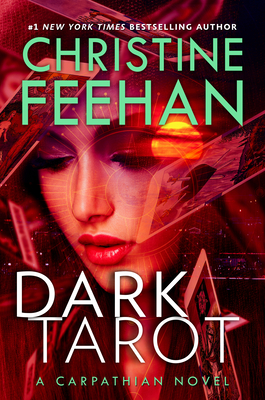 This is book number 35 in the Carpathian Novel, A series.

Sandu Berdardi continues to exist only to protect his people. An ancient Carpathian, his entire long life has been dedicated to honor above all else. He knows his time has passed, especially since he has not been able to find his lifemate—the anchor to keep him sane in a world he no longer understands. But just as he truly starts to give up hope, a voice reaches out to him in the night and his world explodes into color.

Adalasia enters Sandu’s mind seamlessly, as if she has been a part of him forever. While she can see the shape of things to come in her deck of cards, her gift is both a blessing and a curse. The true course of Sandu’s quest remains unclear, with danger waiting at every turn. She cannot see everything the future holds, but she does know it is a journey they will take together.

By joining him, she will start them down a dangerous, seductive path from which there is no coming back....
Christine Feehan is the #1 New York Times bestselling author of the Carpathian series, the GhostWalker series, the Leopard series, the Shadow Riders series, and the Sea Haven novels, including the Drake Sisters series and the Sisters of the Heart series. She also writes standalone thrillers set in the California backcountry.

“Feehan’s 31st entry in the “Dark” series (after Dark Song) is simultaneously a jumping-in point for new readers since it sets up a new story line, and a place for long time fans to enjoy a new couple and revisit old favorites. Required for libraries where Feehan is popular.”—Library Journal

"Fresh and unique with the introduction of the ancients from the monastery and each female having very different powers (no ones ever wielded tarot cards in the previous books)."—Under the Covers Book Blog

"Dark Tarot was an exciting, tense and fun story, with a fantastic couple in Adalasia and Sandu, as well as wonderful secondary characters."—The Reading Cafe

"Dark Tarot is a story that really took my breath away and it was simply beautiful in so many elements...An enthusiastic wild ride of laughs, of thrills and chills, an epic uplift of world-building that only this author crafts, and a stunning romance that conveys such unity, healing, and freedom."—Addicted to Romance

"This book kept me on the edge of my seat right up until the end. I never knew what would happen next, and I really enjoyed the role that Adalasia's tarot cards played in this story. There's a lot more magic in this book than in other books from this series, and I liked the slight twist that the magic brought to the series."—I Smell Sheep

"Suspenseful, full of danger, and action-packed. The subplots tie together well, the main characters are strong, and the ending is bittersweet. If you enjoy thrilling paranormal romantic suspense novels, then I recommend you check out this series."—Mystery & Suspense