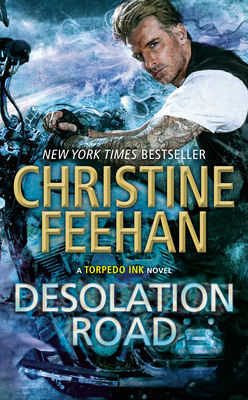 This is book number 4 in the Torpedo Ink series.

Take the ride of your life with the Torpedo Ink motorcycle club in this thrilling romance novel from #1 New York Times bestselling author Christine Feehan.

Torpedo Ink is Aleksei “Absinthe” Solokov’s whole life. They’re his brothers, his family—his everything. But that doesn't stop him from wanting something that only belongs to him. That’s why the tough biker has spent the last six weeks at the library, reading every book he can get his hands on and watching the prim and proper librarian who makes his blood rush.

For the past six weeks, Scarlet Foley has been fantasizing about the handsome, tattooed man whose eyes follow her every move. She senses he's dangerous. She wants him to get close enough to touch. She wishes she could let him know the real woman, not the one she pretends to be. But Scarlet has a plan to carry out, and she can’t afford any distractions.

Absinthe is well aware that Scarlet is hiding something. She’s a puzzle he intends to solve, piece by intoxicating piece….
Christine Feehan is the #1 New York Times bestselling author of the Carpathian series, the GhostWalker series, the Leopard series, the Shadow Riders series and the Sea Haven novels, including the Drake Sisters series and the Sisters of the Heart series.