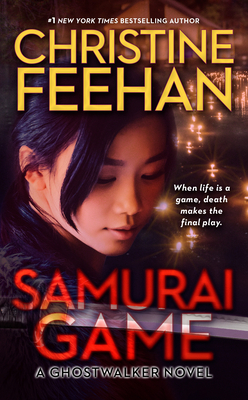 This is book number 10 in the A GhostWalker Novel series.

In a world so dark and seductive, expect nothing less than a triple-cross in this explosive Ghostwalker novel by #1 New York Times bestselling author Christine Feehan…

In an underground club, a high-ranking public official spends his secret nights indulging in fantasies as exciting as they are depraved. For a seductive employee of the Dungeon, it’s her job to fulfill them. But she’s playing a far more dangerous game—one of blackmail, politics, and murder that reaches into the shadow world of the Ghostwalkers, and the creation of a spectacular, one-of-a-kind new weapon of defense.

But when a dictator makes his own catastrophic moves, the Ghostwalkers have no choice but to bring in two major players—a man and woman both driven by passion and revenge. Both expendable. Both with nothing left to lose.

Christine Feehan is the #1 New York Times bestselling author of the Carpathian series, the GhostWalker series, the Leopard series, the Shadow Riders series, and the Sea Haven novels, including the Drake Sisters series and the Sisters of the Heart series.

“Romance, suspense, danger, action-packed excitement, hot hot men, and on top of all that, a couple that sizzles all throughout the book...Sexy as hell.”—The Reading Cafe

“I cannot wait to see where Ms. Feehan takes us next.”—Fresh Fiction

“Packed with adventure...Not only is this a thriller, the sensual scenes rival the steaming bayou. A perfect 10.”—Romance Reviews Today

“One of the best storytellers around!”—RT Book Reviews