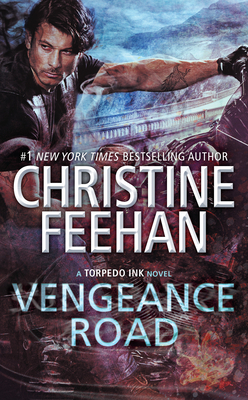 This is book number 2 in the Torpedo Ink series.

Breezy Simmons was born into a ruthless motorcycle club—and now that she’s out, she’s never going to be that girl again. But when her past catches up with her, Breezy must go to Sea Haven to seek out the man who almost destroyed her. The man who chose his club over her and left her feeling used and alone.

As vice president of Torpedo Ink, Steele is ride or die for the brothers he lived through hell with. He never thought he’d find something as pure as his feelings for Breezy, or that keeping her safe would mean driving her away with cruel words that turned her love for him to ash.

Now, Steele won’t let her walk away twice. He’ll do whatever it takes to make Breezy his woman again—especially when he learns the real reason she came to him for help, and that the stakes are higher than he ever could have imagined…
Christine Feehan is the #1 New York Times bestselling author of the Carpathian series, the GhostWalker series, the Leopard series, the Shadow Riders series, and the Sea Haven novels, including the Drake Sisters series and the Sisters of the Heart series.

“I love everything she does.”—J. R. Ward

"Judgment Road and the Torpedo Ink are the stories of the broken; the damaged; betrayal and revenge. The premise is dark, startling and edgy; the characters are colorful, charismatic and protective; the romance is dramatic, controversial and healing. Christine Feehan enters the world of the MC with the first fiery instalment in the Torpedo Ink series."--The Reading Cafe

"Judgment Road was a tantalizing blend of a sexy as all get-out love story and a gritty road to redemption for a bunch of badass bikers who all had something to prove."--Harlequin Junkie

"As Feehan’s fans know, she truly excels at giving readers characters whose demons are oh so close to the surface — which makes their fight to emotionally connect all the more gripping. Feehan is in a class by herself!"--RT Book Reviews