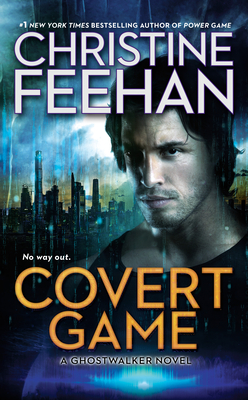 This is book number 14 in the A GhostWalker Novel series.

Treason, torture and temptation haunt the GhostWalkers in their most dangerous adventure yet, as Christine Feehan's #1 New York Times bestselling series hits an explosive new high.

Rescuing an industrial spy from the hands of a criminal mastermind is a suicide mission for the GhostWalkers. And there's no one more up to the task than Gino Mazza. He's the perfect killing machine--a man driven by demons so dark and destructive that his blighted soul has given up trying to find solace. But his laser-sharp focus on his target has transformed into something nearing desire.

A treasonous senator dangled top secret GhostWalker data in front of a Chinese crime lord, and he bit. Zara Hightower, one of the world's leading experts on artificial intelligence, was sent in to psychically wipe the crime lord's computer network. She succeeded, but at a huge cost. Now she's the captive of a man who has descended into paranoid madness. Torture and death await her...

But GhostWalkers never leave one of their own in enemy territory. And it's up to Gino to save Zara, or kill her if it turns out she's led them into a trap. Either way, heaven or hell won't stop him...
Christine Feehan is the #1 New York Times bestselling author of the Carpathian series, the GhostWalker series, the Leopard series, the Shadow Riders series, and the Sea Haven novels, including the Drake Sisters series and the Sisters of the Heart series.

“Confrontations with old enemies and the discovery of potential new ones throws another big complication into the lives of Feehan’s latest protagonists and all of the allied GhostWalkers. One of the key reasons why Feehan’s GhostWalkers series is so outstanding is its overarching theme of outsiders learning how to trust, love and build relationships. Paranormal romance at its best!”—RT Book Reviews (4½ stars, Top Pick)

“This well-balanced hero is a treat for readers looking for a bad-boy alpha with a dash of sweetness.”—Booklist

“Probably the most action-packed, exciting installment I’ve read in the GhostWalker series so far...Things are only getting more interesting for the GhostWalkers and where Christine Feehan will take us from here is anyone’s guess.”—Harlequin Junkie

“Romance, suspense, danger, action-packed excitement, hot hot men, and on top of all that, a couple that sizzles all throughout the book...Sexy as hell.”—The Reading Cafe

“I cannot wait to see where Ms. Feehan takes us next.”—Fresh Fiction

“Packed with adventure...Not only is this a thriller, the sensual scenes rival the steaming bayou. A perfect 10.”—Romance Reviews Today

“One of the best storytellers around!”—RT Book Reviews