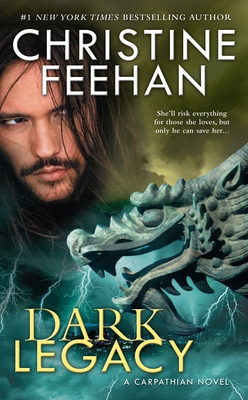 This is book number 31 in the Carpathian Novel, A series.

In a thrilling Carpathian novel from #1 New York Times bestselling author Christine Feehan, a woman fights to free herself from the grip of the vampire trying to possess her...

In a beautiful compound hidden away from the world, Emeline Sanchez tries to blunt the pain that has wracked her body ever since her terrifying ordeal in the labyrinth beneath the city—when she was forced to exchange blood with an evil master vampire.

Now, it’s his voice that haunts her...that calls to her in the dark...that never lets her rest. And while the children that she helped to free from his clutches struggle to heal, watched over by their Carpathian protectors, Emeline knows one thing: She must sacrifice herself to keep them all from harm...

For her beauty is irresistible to the vampires, her psychic ability like a drug. Whipped into a frenzy, they’ll never stop coming for her. And only the taste of one Carpathian warrior—the rush of his blood—can save her...
Christine Feehan is the #1 New York Times bestselling author of the Carpathian series (Dark Carousel, Dark Promises), the GhostWalker series (Power Game, Spider Game), the Leopard series (Leopard’s Fury, Wild Cat), the Sea Haven series (Bound Together, Fire Bound) and the Shadow series (Shadow Reaper, Shadow Rider).

Praise for Christine Feehan and her Carpathian novels

“Red-hot romance and great storytelling…a treat you can’t refuse…Thrill-a-minute fantasy with complex characters and a story that captivates from beginning to end.”—Fresh Fiction