The Mapping of Love and Death: A Maisie Dobbs Novel (Paperback) 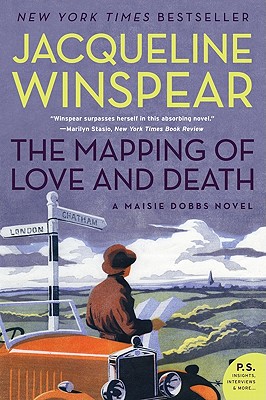 The Mapping of Love and Death: A Maisie Dobbs Novel (Paperback)

This is book number 7 in the Maisie Dobbs series.

“To open a new Maisie Dobbs mystery is like checking in with an old friend. In this sixth book, Maisie has been asked to discover what really happened to World War I cartographer Michael, listed as missing in the trenches in France. The closer she gets to answers for Michael's family, the more she must deal with personal issues that will change her life. I can't wait to read the next installment!”
— Sue Richardson, Maine Coast Book Shop, Inc., Damariscotta, ME

In this riveting mystery from New York Times bestselling author Jacqueline Winspear, Maisie Dobbs is hired to unravel a case of wartime love and death, an investigation that leads her to a doomed affair between a young cartographer and a mysterious nurse.

August 1914. As Michael Clifton is mapping land he has just purchased in California's beautiful Santa Ynez Valley, war is declared in Europe—and duty-bound to his father's native country, the young cartographer soon sets sail for England to serve in the British army. Three years later, he is listed as missing in action.

April 1932. After Michael's remains are unearthed in France, his parents retain London psychologist and investigator Maisie Dobbs, hoping she can find the unnamed nurse whose love letters were among their late son's belongings. It is a quest that leads Maisie back to her own bittersweet wartime love—and to the stunning discovery that Michael Clifton was murdered in his dugout. Suddenly an exposed web of intrigue and violence threatens to ensnare the dead soldier's family and even Maisie herself as she attempts to cope with the impending loss of her mentor and the unsettling awareness that she is once again falling in love.

“In Maisie Dobbs, Jacqueline Winspear has given us a real gift. Maisie Dobbs has not been created—she has been discovered. Such people are always there amongst us, waiting for somebody like Ms. Winspear to come along and reveal them. And what a revelation it is!” — Alexander McCall Smith

“Endearing. . . . As often in this winning series, the action builds to a somewhat sad if satisfying conclusion.” — Publishers Weekly (starred review)

“When people ask me to recommend an author, one name consistently comes to mind: Jacqueline Winspear.” — Deirdre Donahue, USA Today

“[Catches] the sorrow of a lost generation in the character of one exceptional woman.” — Dick Adler, Chicago Tribune

“What charms most is Dobbs herself: a woman ‘not as adept in her personal life as she was in her professional domain,’ and all the more engaging for that.” — Tom Nolan, Wall Street Journal